Our staff go to incredible lengths to support the hobbies and interests of our individuals.  An example of this is the support given to a young man who made the transition from a residential school to adult services.  He has delayed global development, speech and language issues, complex emotional needs, fixations and behaviours which challenge.

Prior to the individual coming into the home, our manager met him during the assessment period at his home to gain an in-depth understanding of his hobbies and interests which included gardens, greenhouses, walks, plants and collecting items such as fossils, skeletons and crystals.  Part of the challenge at the time was that he presented cyclical acts of aggressive out-bursts resulting in him damaging the artefacts that were precious to him, from his collection.

He was supported through an extremely difficult transition presenting intolerant, reactive, defensive behaviour and did not listen to support given or take criticism well.  Living with adults was difficult having come from what he described as a punitive environment (residential school) where there were considerable restrictions and his choices were not respected, for example if he had been involved in an incident, he was not able to go out the next day.

Once the resident had moved to the home, he was able to share with our manager, his concern about breaking the artefacts he had collected, which were precious to him, during his outbursts.  During outbursts he used items in his collection, kept in his bedroom, as weapons against staff, throwing them down the corridor and breaking them.

In order to protect his precious artefacts and alleviate the stress caused to him as a result, our manager facilitated discussions with all those concerned to establish a supportive person-centred plan.  He was supported to prepare  a dedicated room which became his museum, showcasing his precious collection of features, crystals, snake skins, archaeology finds, china, stones, bones, full animal skeletons and an area dedicated to his particular fascination with the Titanic memorabilia. His interest in plants was supported by allocating him a dedicated area in the garden to grow his favourite plants and purchase a monkey puzzle tree.  The manager supported his interest in rare and poisonous plants which are legally protected, by offering alternate means to support his interest in a safe way through photography and searching on the internet. Equally, staff are now able to manage previously difficult situations by means of negotiating with him and offering alternative solutions.

He has a real sense of purpose and pride and improved self-worth.

He has even gained external interest and support from jewellers who have donated items.

“At Spenser Road I have lots of friends”
Staff Story 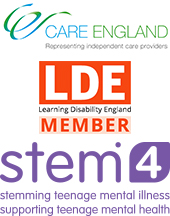